A downloadable game for Windows, macOS, Linux, and Android

This game is in development

May contain bugs, inconveniences, and general imperfections. All content is work in progress and subject to change until the game's completion (estimated in early 2020).

Demonizer is a vertical shooter in the early to mid 90s arcade style of Raiden Fighters and Battle Garegga.

In a cartoon fantasy land, an exiled princess has turned into a demon and joined the peaceful monster-girl tribe. When her former kingdom attacks she fights back with her newfound hypnotic and transformative powers. She departs for the king's throne room where she will confront her father and bring the invasion to an end.

Survive the waves of advancing human soldiers and capture as many of them as you can. Fire magic stun lasers and bombs to defend yourself and save your monster-girl friends, then catch the unconscious enemies before they fall offscreen. Some you keep to harvest their spirit energy. Others you transform into sister demons who fight by your side. As you gather more spirit energy, you refill your bomb supply and unlock additional powers to grab enemies from afar.

Available for Windows, Mac OSX, Android, Linux, and other platforms:

You can also support the game on Patreon.

For the price of the game or more per month, get access to the private repository, where you can download development builds and try out levels and features as they're developing.

To stream the full game, you can request a key at Keymailer:

In order to download this game you must purchase it at or above the minimum price of $7 USD. You will get access to the following files:

I'm interested in these kinda game but haven't got into this genre. Because of that I figured out to get into this kinda genre with this game. Maybe for noob of this genre this game might be too hard. Or it's better to experience hard games of genre to get into same genre? But either case even if it's hard it was fun. And probably I need to replay same level as much as I needed. With which could I have learned enemy and bullet patterns to be able to avoid them.

Also I mostly was focusing on destroying enemies, maybe I needed to focus mostly on avoid bullets.

I played Android version and was wondering if with keyboard it will be different. How little I tried I didn't find difference between touchscreen and keyboard... Ok maybe one which is that on touch your finger might block seeing where your character are. However to move character on touchscreen you don't hold screen where it is character. Finger can be under or over character and with that you will able to tell how close or far bullet it is to you.

And there isn't difference of game screen aspect ratio between different platform. Only resolution but it can change between same platform.

But like I before wrote it was enjoyable even when it's hard. I guess who are interested to see how bad I played there here is video of it:

I had a chance to cover this game for my channels and I absolutely loved it. It really pays tribute to the old school bullet hells and shmups. I wasn't sure if it was supposed to move that fast but none the less I felt that the enemies moving that fast worked for the game. Was wondering if you were going to add other game modes such as an easy mode? Other than that it was a great game and I look forward to when it comes out of early access. Hoping it does good enough to see ports to consoles as well.

Here is my gameplay video of the game

Hi, thanks again for the feature. I added mouse input as a way to test touch input and make sure it doesn't break the game. I think I'll keep it in, but have you choose a control type at the beginning and not allow switching in mid-game.

I would like to add difficulty settings, if I can be a little more creative than simply adjusting bullet speed/count. One idea to help new players is a collectible hint card system for learning enemy weaknesses and more obscure mechanics. I'll have more details in my devlog hopefully soon.

I originally played with my XBOX Controller and thought it was fine with the controller as well. Also, I was thinking instead of the game being on a dark screen. If it's doable if you added a background to it as a feature. So people could choose to play with solid black background or with the background.

Here's my gameplay - GO'd at 1:38 ish, but did pretty decent after that until I eventually died x3

And I took the liberty of creating side art fillers x3

Nothing too special, but I like filling the screen :3

Thanks much. Can't wait for a chance to watch it.

this is SO BRUTAL xD I like it so far, it's  pretty impressive the bullet patterns going on here.

Thanks, let me know if you have video.  It really helps with making the gameplay and levels better.

yeah ^^ i sampled all the levels, the inebriated mode was probably the most devastating one, lol ^^

gonna be posting it alongside a bunch of other STG games i scooped up :) 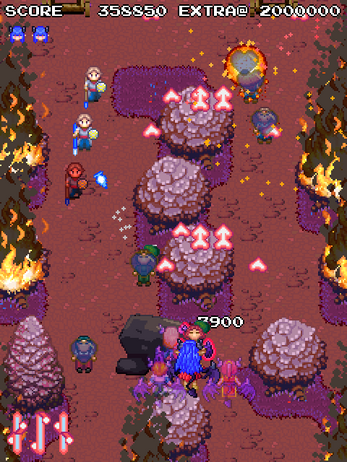 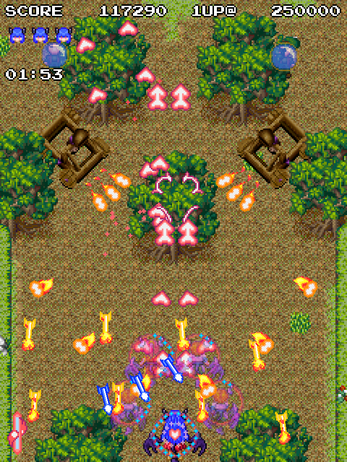